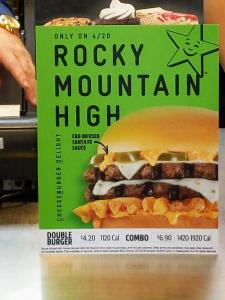 Despite CBD Being Unapproved as a Food Additive by the FDA, Carl’s Jr. is Selling CBD-Infused Cheeseburgers

DENVER, COLORADO, USA, April 20, 2019 /EINPresswire.com/ — Today is 420, and since I’m in Colorado I had to go to the one Carl’s Jr. that is selling CBD-infused “Rocky Mountain High Cheeseburger Delights.”

420 started as an inside joke among a group of Northern California high school students in the 1970s, and has become somewhat of a holiday for marijuana consumers. In recent years 420 has expanded to encompass all things that those in the marijuana community hold dear. CBD-infused burgers are clearly a way to celebrate 420.
I arrived at the one Carl’s Jr. location that was selling the CBD-infused burgers a little before 11:00 am and it was mayhem. There were people directing traffic, the parking lot was overflowing, and there were about 30 cars in the drive-through lane.

Appropriately enough, the Carl’s Jr. burgers were sold for $4.20. The CBD was infused in the burger’s “Santa Fe Sauce,” which included jalapenos.

Each burger was infused with 5 mg of CBD, a very minimal quantity. The amount of CBD was certainly not enough to provide any of its well-publicized benefits. While speaking to other customers who were waiting in line, their interest in eating a CBD-infused burger was not about any health benefit, but simply instead was a way to celebrate 420.

I’m guessing that Carl’s Jr. corporate offices had no idea how their franchisee in Denver was celebrating 420. Because the Food and Drug Administration (FDA) has not approved CBD as a food-additive, I asked who I thought was the manager whether he had received any calls from either the Colorado or Denver health departments. He said that they had received three calls, but he didn’t respond to my follow-up question regarding the calls. It was clear that the calls didn’t affect their plans to sell CBD-infused burgers. Since the CBD-infused burgers were only being sold for one day, I’m assuming that the state and city decided to let Carl’s Jr. proceed with their 420 celebration.

Carl’s Jr.’s CBD-infused burgers are significant in that it is the first time that a national food chain has added CBD to a menu item. It’s another indication that despite the illegality of CBD as a food additive, that CBD is here to stay, and that no efforts by the FDA will slow down this new industry.

Carl's Jr. Restaurants is an American fast food restaurant chain owned by CKE Restaurant Holdings, Inc. The company has more than 1490 franchised and company-owned locations in the U.S., Canada, Australia.