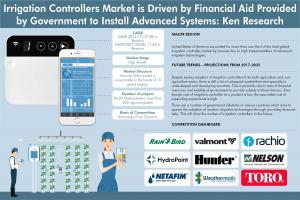 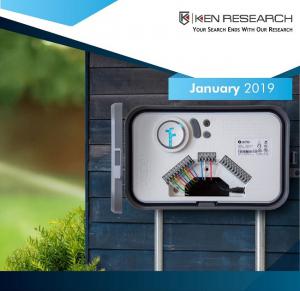 GLOBAL, January 29, 2020 /EINPresswire.com/ — Cloud computing is the latest technology that is being used in the irrigation sector in analyzing the data captured from the field.

Increasing water stress level on most of the countries has prompted the government to increase awareness about water conserving techniques in agriculture as well as non-agriculture sector.

The market for irrigation controllers is still in the growth stage across many economies. It is expected to register double digit growth as it has gained fresh momentum due to enhanced focus of the government in many emerging countries. Demand for irrigation controller equipments will be largely driven by smart home, landscape management and large scale farmers mainly engaged in horticulture and vegetable farming. In the last few years, these sectors have seen rapid growth in various regions across the globe. The government regulations for water conservation have also played a major role in wide acceptance of irrigation controller in many areas. New technologies such as Internet of Things, artificial intelligence and wireless connectivity will be widely applied in the sector in various domains. The level of technology used in various regions depends on economic condition and education level of the farmers.

North American countries (mainly the US) will drive majority of the demand from the market in the future. The market is flooded with sensors based or weather based irrigation controllers.The market dynamics across the globe has some common feature which vary with social, economic and political scenario of the region. Government initiatives in various countries aims to spread the adoption of modern irrigation technologies through financial help, promotion of internationally adopted practices such as drip irrigation will further augment the demand for irrigation controllers. Replacement demand for existing controllers and technology upgradation of existing controllers will help in creating the recurring demand thus having positive impact on the market.

Analysts at Ken Research in their latest publication “Global Irrigation Controller Market Outlook to 2023 – By Region (North America, Europe, Asia Pacific, Rest of the World), By Type of System (Sensor Based System, Weather Based System) and By Type of Application (Agriculture and Non-Agriculture)” believed that revamping the distribution system, partnerships with financial institutions (to support farm loans), focus on research and development, creation of collaborating communities will help in maximizing the delivered value from manufacturers of irrigation controllers and government to the end users. Manufacturers should focus on increasing the perceived value of their products by communicating the long term benefits of their products. Global Irrigation Controller market is expected to reach USD 715 million by 2023.

Time Period Captured in the Report:

Key Topics Covered in the Report

For more information on the research report, refer to below link: