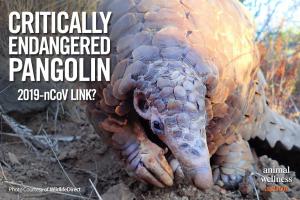 Wet markets are open-air abattoirs, offering up dozens of species of live animals, including fish in tanks and wildlife in crates, for selection and slaughter by those with an appetite for biodiversity.

These pop-up butcheries, with animals jammed in cages and sporting injuries and trauma experienced from their capture, threaten much more than the animals headed for the chopping block.

They threaten the health of people in China and potentially across the world.

And they threaten to take a major bite out of the global economy.

The risk and reward of these animal bazaars could not be more asymmetrical. On one hand, there are profits for a few hundred wet market operators, farmers who raise exotic animals, and wildlife traffickers who snare, trap and capture the creatures destined for the markets. On the other hand, there is massive loss of life and trillions of dollars in lost economic activity due to the zoonotic diseases they incubate and spread.

You don’t need a degree in economics or public health to figure this one out.

In November 2002, the Guangdong province of China had an outbreak of SARS (severe acute respiratory syndrome). Over the following several months, 8,096 people in 26 countries contracted the new viral illness, resulting in 774 deaths. Wet markets are thought to have been the incubators of this pandemic, with civet cats and cave-dwelling horseshoe bats the vectors to pass the deadly SARS virus to humans.

But as the SARS epidemic receded from the headlines and other news took over, China allowed wet markets to resume their grisly trade.

Now the death toll for the coronavirus has exceeded that of SARS, and the reach of the virus continues to spread.
In late January, Wuhan authorities banned the trade of live animals at wet markets.

According to National Geographic, “State-controlled media outlets such as China Daily have published scathing editorials denouncing the practice (of wet markets) and calling for a permanent wildlife trade ban.” There is some thought that this incident will be the tipping point leading the government to crack down on them permanently.

According to a study by the South China Agricultural University, “The genome sequence of the novel coronavirus strain separated from pangolins was 99 percent identical to that from infected people, indicating pangolins may be an intermediate host of the virus.”

Pangolins are listed by the IUCN as critically endangered, and widely believed to be the most captured and trafficked animal in the world. “While they are protected by international treaties and national laws, rogue animal traders in China are driving their demise,” said Jennifer Skiff, Director of International Programs for the Center for a Humane Economy and Animal Wellness Action. “And they are putting us all at risk.”

The 2019-nCoV coronavirus is believed to have originated at a wet market in Wuhan, China, where humans and animals are in a bit of a biological mixing bowl. “Animals sold in these types of markets range from pangolins to civet cats to wolf and bear cubs,” Skiff said. “It’s time for Chinese leaders to enforce the agreements they publicly endorse by shuttering these dangerous markets permanently.” According to the World Health Organization, the current coronavirus is related to, but distinct from, the SARS virus.

With nearly 1,000 dead and 40,000 confirmed infections, the coronavirus is causing panic in some parts of China. According to news agencies, people in Wuhan are abandoning and even killing their pets for fear the animals may be carriers.

Indeed, let’s remember perhaps as many as 70 percent of zoonotic diseases that afflict humans started in animals and crossed the species barrier. HIV is thought to have arisen from the bushmeat trade in Africa, with the butchering of a chimp a few decades ago. The toll from HIV is 30 million and climbing; it remains a deadly threat in a number of African and developing nations even as treatments have dramatically reduced mortality rates in the United States and elsewhere.

Wet markets in Asia are not the only reservoirs of infections to threaten humans. The spread of monkeypox traces back to the exotic pet trade; swine flu to long-distance live animal transport; bird flu to the cockfighting industry; and the Ebola virus, which in the Democratic Republic of Congo kills 90 percent of its victims, to the bush meat trade.

Live animal markets operate in the United States too, mainly in the Chinatown sections of several major cities. Eric Mills of Action for Animals says California annually imports some two million non-native American bullfrogs and 300,000 freshwater turtles for human consumption. “The market animals are kept in horrendous conditions, and often butchered while fully conscious.” Mills adds, “Worse, the majority of the bullfrogs carry the chytrid fungus which has caused the extinction of 200-plus amphibian species worldwide in recent years.”

(It’s not just live animal markets that pose a public health menace. Factory farming and the slaughter industry have been blamed for the emergence and spread of a whole host of threats including antibiotic-resistant bacteria, egg-borne Salmonella, mad cow disease and dangerous strains of influenza.)

Policy makers in China and the rest of the world who study the problem that started in Wuhan will arrive at an inescapable conclusion. Wet markets are a threat to native wildlife, they are exceedingly cruel, they are known purveyors of mass casualties in the human community, and they must be closed.