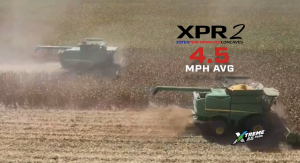 Matt Miles with XtremeAg and we're out here in a in a field of a corn that we cut yesterday. I'm doing a report on the new Estes XPR2 concaves and I know that Kelly Garrett and Kevin Matthews has run them. We got our set, put it in Saturday and we're very impressed with what we have seen so far. We can run faster and it's doing a better job with grain loss. We're running two John Deere S680's with 8-row corn heads with shredders. We put the XPR 2 concaves in one of them and left the OEM concaves in the other one so we could get a direct comparison. I'm going to show you what we saw yesterday and I think we got some pretty exciting news for you.

Alright guys, so we're out in the field now and this is our OEM John Deere concaves on John Deere S680 combine. This corn was wet was running about 250 bushels, moisture was 19% to 20%, going in the grain bins with it. To check grain loss, we've pulled out three foot of husks and stover and checking with this is one-foot by one-foot PVC. We got behind the combine made sure we were in a row with the most corn behind it. You can put this 1X1 PVC anywhere here in this three foot area and you're going to come up with about three kernels behind the OEM; in the three foot span that we measured off, there are nine kernels. So you can move this around any place and you're going to get about three kernels in a square foot. So this is what the OEM John Deere concaves looks like.

Now we're behind the Estes XPR 2 concaves, same combine John Deere S680 combine. We took our one foot by one foot square walked out behind the combine and threw it out in the field. We're out in the field deep enough that we make sure the combine is loaded up and it's at its full capacity because If you do it right on the ends, you come to the end of your coming out, you're going to be slower or faster. So we get out of the middle of field to do this and you can throw it basically anywhere in this 3-foot section and maybe get a kernel to zero. Like I said when we hunted around and then found five kernels in 3 square foot area. So we're really impressed with that. Take into consideration that we do not have the XPR 2 Xtreme separator grate installed. You know for what we do and how we set our combine, the speed we run, you know, cutting here in the Delta, we feel like that's about as good as we could get. So if we get that seperator grate, and it does even a little bit more we're probably going to get this thing down to zero. We are very impressed with the Estes XPR2 concaves. Combine operators are very impressed. The guy who's driving this particular combines on cloud nine because he laps the other combine during the day several times.

Okay, so do some of the calculations that we've come up with using the GoHarvest app, which is a John Deere app, specifically built for the John Deere combine. And you take the amount of losses out the back and depending on the yield and the moisture on the corner to give you kind of what you're losing per acre. And with the John Deere concaves we're losing roughly on that app about 2.1 bushels to the acre, that comes out to be 0.84% bushel per acre loss. On the XPR2 concaves we're at a 0.95 bushel loss which converts out on that app 0.38% bushel per acre loss (using 30% less horsepower). So, you know, there's a pretty good money difference there this year with corn prices where they are. Not to mention, our OEM John Deere combine is run at the average about 3.2 MPH. We run HarvestSmart so it kind of takes control depending on the yield and where we're at as to what the combines running (MPH). With Estes XPR2 concaves, we're running 4.5 MPH (40% faster ground speed).

Those calculations, you know, 25 to 35 acres a day more harvested. Roughly a bushel and a half better yield. You know, you do all those numbers and it's probably one of the best ROI Investments that XtremeAg or I personally have been involved with so. So little skeptical when I started. I didn't know an aftermarket concave could make that much difference, but it's really made a difference for us.