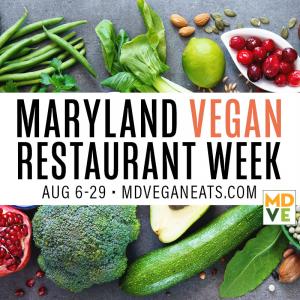 This summer, Maryland Vegan Eats continues its ever-expanding Maryland Vegan Restaurant Week in the month of August, from 8/6 – 8/29. The month-long celebration of plant-based eating provides the opportunity for vegan as well as omnivorous eaters to try plant-based dishes from eateries across the Baltimore/DC Metro area from a wide array of new and past participating restaurants. While satisfying the growing demand for more plant-based options in restaurants, it also creates a testing ground for omnivorous eateries that may not have otherwise been considered veg-friendly to introduce new plant-based offerings into their menus. As the public looks forward to Maryland Vegan Restaurant Week, the organizers, Samantha Claassen of Golden West Café and Naijha Wright-Brown of The Land of Kush, are also excited about continuing their expansion of the Vegan Restaurant Week concept, not only throughout Maryland but also throughout the country.

Begun in 2017, Maryland Vegan Restaurant Week was a brand new idea, not only in the DMV, but also in the country. Since starting the concept, cities like Philadelphia, Colorado Springs, and others have reached out to Claassen and Wright-Brown to help replicate the concept in their own communities. “We’re just excited to promote plant-based eating however we can,” the two restaurant owners comment, “We started it because we wanted a way to highlight all of the veg-friendly restaurants in our area and it’s since grown to incorporate omni restaurants, who are now seeing that there’s a huge demand for plant-based dishes on their menu. The more we can influence restaurants to have a good variety of vegan dishes, beyond just a salad, the better.” And due to that demand, the organizers have since extended the Vegan Restaurant Week to span the time frame of a whole month to allow participants to get to an ever-expanding number of restaurants participating.

Unlike a traditional restaurant week that provides a prix fixe menu, participating restaurants are encouraged to create a selection of plant-based items to be offered throughout the vegan weeks – with the understanding that inclusivity also means affordability. Maryland Vegan Restaurant Week allows for restaurants to be more creative with their cuisines using plant-based and vegan ingredients while at the same time expanding their reach into the plant-based market. Part of their success is the liberty that vegan, plant-based, and even veg-curious patrons have in choosing these options over meat-centric dishes because of increased availability at more restaurant locations. Additionally, vegan customers no longer have to ask for a meal catered to their dietary restrictions which can leave some feeling embarrassed and awkward.

During the week, restaurant chefs are given the opportunity to show off their true culinary skills by creating their best and most appealing plant-based cuisine with the hope that people will vote for their dish as the best. Restaurants wishing to sign up for this month-long celebration of plant-based eating can go to www.mdveganeats.com for more information on how to register and participate. The list of current participating restaurants and eateries currently include:
Golden West Cafe, The Land of Kush (voted TripAdvisor's Top 10 Best of the Best Vegan Restaurants in the US), Suspended Brewing, Sapwood Cellars, Main Street Pearl, Char'd City, Chihuahua Brothers, Friends and Family, Treehouse Café and Juice Bar, Miss Shirley's, Harmony Bakery, Larder, Hue Café & Apothecary, Liora, and Double Zero, The Charmery, Green House Juice Cafe, Great Sage, Gangster Vegan, Red Emma’s, Wicked Sisters, Alexander’s Tavern, Papi’s Tacos, Refocused Vegan, STEM Farm + Kitchen, Charm School Chocolates, The Verandah, Johnny Rad’s, Baby’s On Fire, My Mama’s Vegan, Heritage Kitchen and more to come!

Since its inception by Land of Kush and the Golden West Cafe in Baltimore, the mission of Vegan Restaurant Week continues to be to bridge the omnivorous gap by increasing the awareness, benefits, and accessibility of a plant-based diet through a fun, innovative, and community-based experience.
At Maryland Vegan Restaurant Week, everyone is welcome at the table. Join in. Visit www.mdveganeats.com for links to menus, locations, and more info.