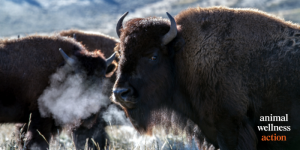 WASHINGTON, DC, UNITED STATES, September 21, 2021 /EINPresswire.com/ — (Washington, D.C.) – Animal Wellness Action and partner organizations have received news that an accredited land trust organization based in Colorado is willing to take 12 bison soon set to be shot within Grand Canyon National Park, providing a solution that would preserve the park’s interest in reducing its bison population but also maintain the park’s prohibition on hunting that’s been in place since the unit was designated by Congress more than a century ago. Colorado Governor Jared Polis endorsed the plan today in an official statement.

“We would happily provide permanent refuge for those 12 bison,” said Nicole Rosmarino, Ph.D., executive director of the Southern Plains Land Trust. “Our preserve in southeast Colorado, at 25,000 acres, has a sanctuary herd of bison, and these additional animals would be welcome. We stand ready to allow a win-win solution for the park and for the bison.”

“Our American Bison are a majestic and iconic species of wildlife. It is rare for the lethal removal of Bison to be allowed on National Park Service land which is owned by all Americans. This decision should be reversed and we would welcome these 12 bison to live and roam free at the Southern Plains Land Trust in Bent County. I urge Interior and the National Park Service to consider this practical Colorado solution,” said Governor Jared Polis.

The land trust, established in 1998, has six prairie preserves covering 32,000 acres in southeastern Colorado, in three counties. Since the NPS is already translocating 88 bison within Grand Canyon National Park to tribes, translocation is eminently feasible. The proximity of the Colorado reserves to Grand Canyon would minimize transport stress for the animals.

This year, Animal Wellness Action and its partners have called for NPS to halt plans to allow trophy hunters to kill human-habituated bison in the north rim of Grand Canyon National Park, a plan that subverts a 100-year precedent of forbidding sport hunting in our national parks and monuments.

That same plea was made on Friday by Congressman Joe Neguse, D-Colorado, the chairman of the National Parks, Forests and Public Lands Subcommittee, who sent a letter to Secretary Haaland with a bipartisan group of lawmakers.

In cooperation with the Arizona Game and Fish Department, the NPS conducted a lottery to select hunters to win the opportunity to shoot the bison and to leave with the carcasses and trophies of the animals. There were 45,000 applicants, demonstrating that would-be participants believe this is a rare opportunity to shoot a bison in a national park and collect a trophy.

“The National Park Service may euphemistically call this action ‘a cull,’ but the agency has participated in a lottery to select participants, will allow the winners to enter the park with firearms, authorize them to gun down bison, and leave with the carcass and trophy,” said Wayne Pacelle, president of Animal Wellness Action. “This has every imaginable feature of a bison hunt, and that’s a pattern of behavior you just don’t see in America’s national parks.”

Neguse and four other lawmakers called out the kill as unnecessary. “We would encourage you to not move forward with the lethal removal scheduled for next week and revisit alternative methods that can be used to manage the population within the park boundaries,” wrote Congressman Neguse, along with Madeleine Dean, D-Penn., Brian Fitzpatrick, R-Penn., Marcy Kaptur, D-Ohio, and Jan Schakowsky, D-Ill.

The United States, except just one park given congressional authorization for hunting of a single species, has long forbidden trophy hunting of animals in national parks. The same is true for national monuments. Not even in Yellowstone National Park, where the treatment of bison by multiple state and federal agencies has come under intense scrutiny, is the NPS allowing hunters to kill bison within the boundaries of the park.

Last week, in a column in the New York Times, Arizonan and former White House senior speechwriter Matthew Scully urged Haaland to call off the hunt.

Bison species have, since the Pleistocene, ranged from Yukon and Alaska to the Valley of Mexico. The bison occupies an outsized place within the annals of the National Park Service as well, and it is prominently featured on the logo of the agency.

In recent weeks, more than 45,000 supporters of AWA attempted to contact Secretary Haaland to urge her to cancel the hunt.

The Center for a Humane Economy (“the Center”) is a non-profit organization that focuses on influencing the conduct of corporations to forge a humane economic order. The first organization of its kind in the animal protection movement, the Center encourages businesses to honor their social responsibilities in a culture where consumers, investors, and other key stakeholders abhor cruelty and the degradation of the environment and embrace innovation as a means of eliminating both.